Anyone with reasonable intelligence knows that our method of writing music could use some improvement. What is needed is a notation system than is cleaner, less crowded and makes sense. The many enharmonic spellings (Eb/D# etc.) cause a lot of confusion and should be discarded. A symbol for a note should always represent the same note and not be subject to various key signatures. Furthermore, the same note should have the same symbol in all registers (octaves). The conventional system fails miserably in these aspects. The timing structure of the conventional system is very cluttered and overcrowds the symbols that refer to pitch. The letters that refer to the notes of conventional symbols do not represent a particular AMOUNT of pitch (increase or decrease) and cannot be added or subtracted to show relative pitch locations – “A” cannot be added to “B” to get “C” etc. These problems limit the ability of musicians to easily grasp the vertical spectrum of pitch and the horizontal spectrum of time that form the basis of all written music. The solutions presented here have been practiced in the real world of composing and performing. The prerequisites were to come up with a notation system that is an improvement in many ways without giving up any of the capabilities of the conventional system. The basic concept is to plot a graph with pitch occurring vertically and time occurring horizontally. The practical application of that concept is to adjust it so that the human eye and brain can deal with it in the most efficient manner. The common musical stave of five horizontal lines is a good starting point because more than 5 lines can confuse and lose the reader. Refer to the symbol chart below as this system is explained.

The letters “A”, “B”, “C#” etc., have been replaced with numbers.  This is the best way to name notes as the distances of pitch are well represented.  The numbers can be added or subtracted from each other to indicate intervals.  “C” has been replaced with “1” and each succeeding 1/2 step gets an increased number (C# = 2).   We have to use the base twelve math system because there are 12 pitches in an octave.  The symbol for 11 is “-” and the symbol for 12 is “.”  Numbers open up a big mathematical door and bring in the possibility of using equations that would make much more sense than the archaic and cumbersome method of letters presently being used.  Pictorial layouts of numbers and other mathematical tools could be used to represent musical concepts that might not even be attempted otherwise.

A series of triangles and circles laid out in order as represented earlier on the symbol chart works perfectly with the 5 line stave system.  The note “1” (C) is located below the line as with the conventional system but it always has a line through it and so it always appears the same in all octaves.  An octave up places it in the middle line and another octave up from that places it one line above the stave in mirror symmetry of the same note two octaves below.  Every note has the same shape and is symmetrical with its counterpart in other octaves.  To find the same note an octave above or below you only need to count four spaces or lines in either direction to find it.  All sharps and flats are dispensed with.  This is possible because of the triangle shapes hanging above or below the lines.   Notice that a octave spread takes less distance with this system than with the conventional system.  This is a great help in keeping note symbols from running too far above or below the staves as they tend to do in the conventional system.  The triangle symbols are mush easier to recognize than the sharp or flatten symbols of conventional notation.  The problem of having to refer back to key signatures (and enharmonic spellings) is discarded. 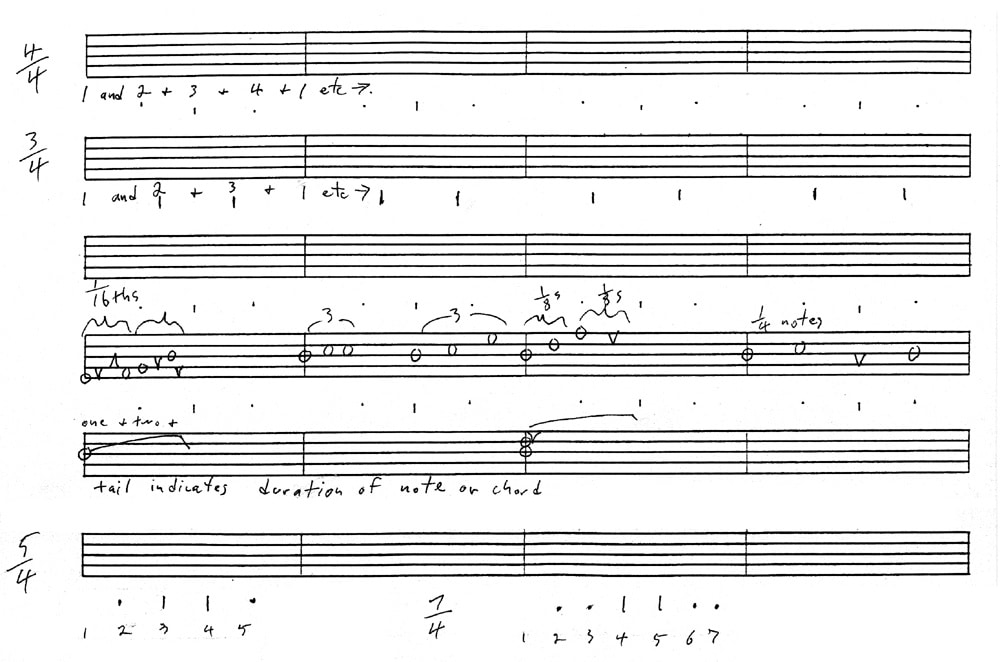 Chord clusters are shown by stacking them vertically on the beat where they begin.Whole notes or any note or chord that is held for an extended duration is shown to have a tail attached to it.  The note lasts as long as the tail extends and the tail ends the note where necessary with an abrupt downward bend at the very end of the tail.  Notes or chords that extend for several measures can substitute a short arrow for the tail, the end of the sustain being represented by a short bent tail.

Any grouping of notes (triplets, 1/8, 1/16 etc.) can be represented as indicated on the timing chart above.

A rest is indicated by the absence of a symbol – nothing stands for nothing.

Repeats and endings example below.

Chords are placed & stacked wherever they occur on the time line. 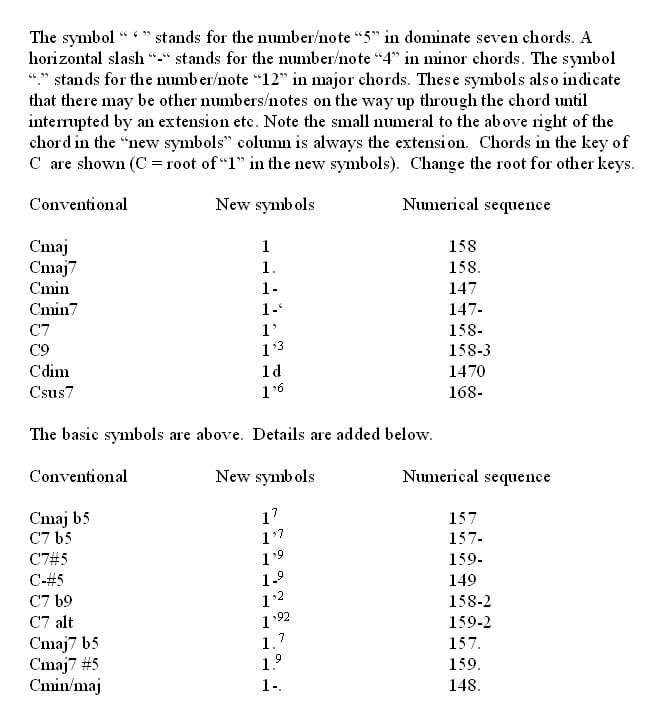 The possible jazz chord symbols go on and on by using combinations of the examples indicated above.

Chord extensions are shown as small numerals positioned to the above right of the chord cluster as represented in the chart above. 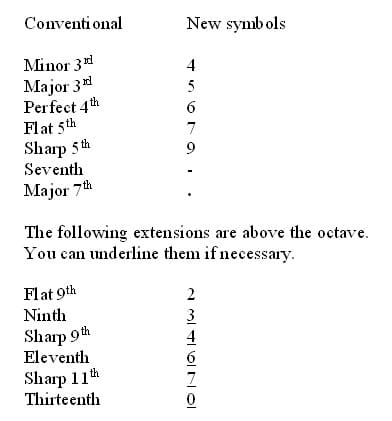 See scale samples below as represented by the new numerical system. 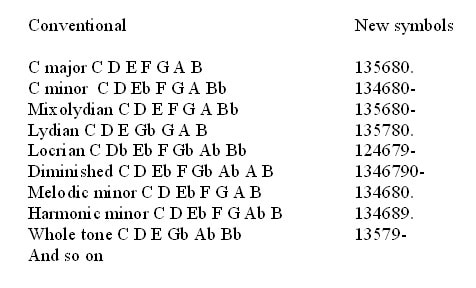 I have hundreds of pages of chord charts and sheet music written in the new Schmidt notation system. See sample below. GO HERE FOR MORE SHEET MUSIC. 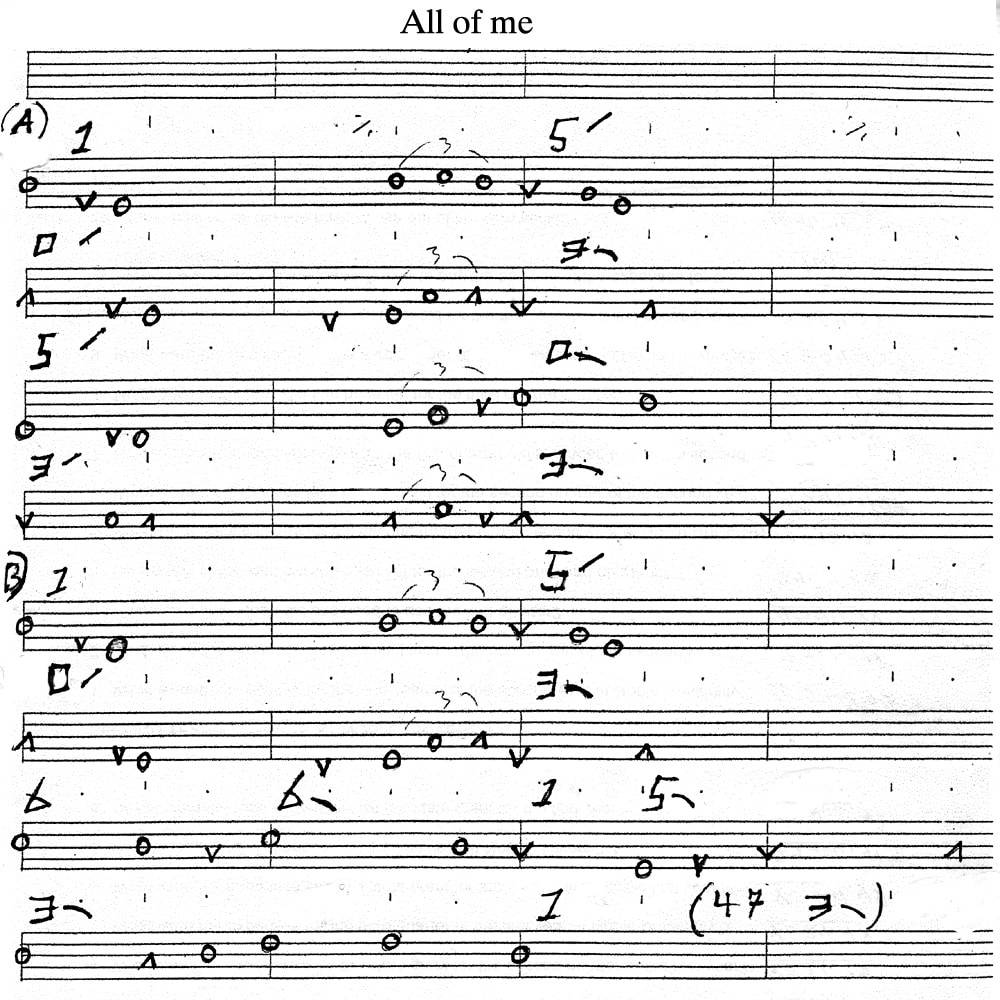 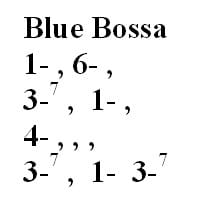